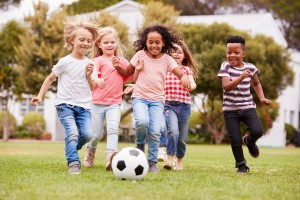 We’ve come to our final two social skills that every kid needs to master. While there are more than just 5 social skills, these five are foundational for all others that develop over time.

#4 Recognizing Feelings in Others and Showing Empathy

It’s very difficult to connect with anyone if we don’t recognize and acknowledge how they are feeling.  One of our basic needs as human beings is connection with others and connection is based in emotional understanding.  When it comes to recognizing emotions in others, we must first recognize our own emotions.  Parents can easily enhance their child’s emotional intelligence by acknowledging and validating their kid’s feelings. Here are some examples:

Validation of emotions enables kids to pair those feeling words with their experience and that helps them notice feelings in others.  When parents model the noticing of emotions to their kids, their kids begin to do the same thing and thus start noticing feelings in others.  It also never hurts to have a conversation about how someone else might feel or talking about putting themselves in someone else’s shoes.

As kids develop the ability to recognize emotions in others, they then start to develop empathy.  Empathy is not the same as sympathy.  Sympathy is feeling bad for someone and showing them that you care.  Empathy is being able to understand how someone feels and even feeling with them because you’ve had a similar experience.  In addition to modeling as a teaching tool, another great way to teach empathy is through books and movies.  When you’re reading with your child or watching a series together, don’t just read or watch.  Talk about the characters.  Ask your child how they think the characters are feeling or how they would feel if they were in the character’s shoes.  This is a safe and engaging way to promote empathy.  Also look for real life opportunities to talk about the feelings of others.  If there is a baby sibling, speak up for them so your older children recognize their feelings even though they can’t speak for themselves yet.  If something happens at school that your child was on the periphery of, talk about what they noticed and how they think the kid’s involved felt.  In the end, conversation and modeling are key when it comes to recognizing emotions and showing empathy.

#5 Resolving Conflict and Respecting the Opinions of Others

In many ways, this last skill is a compilation of all the other skills that have been written about.  The first step in conflict resolution is cooling off.  Without taking a break, conflict will escalate rather than die down.  The second key step in resolving conflict is talking, listening and checking in to make sure you heard what the other person said correctly.  In the heat of the moment, we often hear what we want to hear.  However, when we state back what we just heard, it helps us to hear what they actually said and meant rather than what you think you heard.  Here are some examples:

When we state back what we just heard, we are focusing on really hearing what someone has to say rather than just focusing on what comeback we want to say next.

Another essential step in any conflict resolution is accepting responsibility.  It is important that we teach our children that it takes two people to fight.  When siblings start to argue, Kid A may start it but Kid B yells back and that keeps the fight going.  At that point, both played a part in perpetuating the fight. While feelings are never wrong, behaviors can be, and we all are responsible for our behaviors.  The last step is brainstorming and choosing a solution.  This is where compromise may come into play.  One of my favorite suggestions for families who have kids that argue a lot is to employ a weekly family meeting.  During these meetings, each kid gets to share their perspective on the fight that happened, how they felt, and what they think their role was and then parents assist in coming up with solutions that everyone can live with.  When we start healthy conflict resolution in the home, kids will generalize what they have learned into other areas of their life.

Last but not least is learning how to Respect the Opinions of others.  When conflict arises, inevitably, kids (or adults for that matter), are not going to agree on everything.  We must teach our kids that everyone is entitled to their opinion, whether we agree with it or not.  We also must help our kids understand the difference between fact and opinion.  Facts have evidence and opinions are based primarily on beliefs.  I have worked with so many kids who struggle with frustration when someone’s opinion is different from their own.  The more we talk it through, put ourselves in their shoes, and ask questions to understand the opinions of others, the easier it becomes to accept that not everyone will agree with us all the time.

Social skills take time and practice to develop.  Most of the time, we learn these skills naturally through daily interaction or we learn from watching those around us (especially our parents).  However, when skills don’t seem to be developing as easily, take time to intentionally practice these skills with your kids.  Role play, look for examples in books/movies and engage them in conversation.  The more intentional you are as a parent, the more your children will learn.