Characteristics of Someone Using Drugs/Alcohol 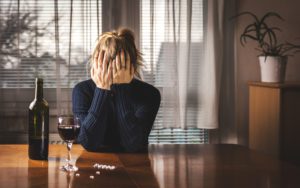 Addiction affects all aspects of a person: physically, emotionally, mentally, socially, and spiritually. They want to present and act as if everything were “normal,” when in reality their behavior and thought processes have been radically affected by the disease. While we (and the addict) would like to believe that they are capable of functioning and thinking normally, the simple fact is that their lives have been “hijacked” by the addiction and everything in their life is influenced and shaped by the drugs or alcohol.

Addicts, alcoholics, and drug users are particularly adept at hiding their using behavior. However, there are signs and symptoms that will clearly manifest themselves over time. The list below contains characteristics of a person who may be using drugs/alcohol on a “weekend” basis, abusing drugs/alcohol consistently, or addicted. One thing to remember is that there may be times when the characteristics can be explained by another illness, allergy, or disability. Also, the person who is using will not match all these characteristics as some are for alcohol and some for other drugs. However, the list provides good guidelines for recognizing the most common symptoms.

A simple way to remember is the 3 C’s:

Denial is a psychological mechanism by which humans protect themselves from a painful understanding by blocking the problem from their conscious awareness. It is also a way to recognize patterns of addiction and addictive thinking. This process affects the person’s ability to be honest (even with themselves) and impairs judgement so that the person becomes involved in increasingly destructive behavior. Denial has many faces but usually manifests itself in the following ways:

How Addicts Think: Distortions of Thought

Another aspect of denial has to do with how the thought processes of an addict are distorted. Addiction affects all aspects of the person, including their thought processes. The problem is that we (and the addict) want to believe that they are still capable of thinking and reasoning normally. However, their thought processes have been distorted by the disease and the radical way in which drugs and/or alcohol have affected their brain. The person will probably not display all of the following characteristics, but you will certainly notice some of them. By the way, these distortions of thought are not determined by intelligence; a person’s IQ really has nothing to do with it.

The first thing to understand is that drugs/alcohol/addictive processes produce pleasurable results and help lessen pain, anxiety, and emotional discomfort. The addict will do anything to relieve discomfort or reduce anxiety; this, or achieving pleasure then become the primary goals in life. Another way to think about this is that the addict has a deep desire to have emotional needs met and emotional pressures relieved (there is an inability to tolerate tension). Any feeling that creates discomfort (including pleasure or celebration) is a signal to use and/or act out.

Addicts don’t think about the future (especially regarding the consequences of their behavior) except in terms of the immediate future. So, the good feeling of using is valued over the long-term effects and consequences (even if it is the next day). A classic example of this is when an alcoholic husband begins drinking in the evening and his wife may say, “You’re drinking a lot, you know you have to go to work in the morning,” and the alcoholic responds, “I’ll worry about that tomorrow!”

Distortion of Logic and Reason

Because of the profound effect of the substance on the prefrontal cortex, the addict will tend to reverse the cause and effect of problems. Rather than admitting that the using/drinking causes the problems, they may say that “I drink because . . .” thus negating that the problem could be the object or the ritual. An example of this is that the person may state that they drink heavily because of the stress of their job, when, in reality, it is their drinking that is causing the difficulties and creating the stress.

In order to reason with ourselves we must:

In all three of these, addiction has altered perception to the point where the addict:

Because of this an addict is unable to make decisions that are in their best interest. All decisions will be filtered through the addiction. And, in a cruel twist, they are unable to recognize the contradictions and self-deception.

Because of the effect of drugs/alcohol on the brain, the using object and ritual become primary in the person’s life. All of life revolves around it. And, in one of the most difficult ideas for family members and loved ones to accept: because it has affected the area of the brain that is involved with survival, anyone or anything that disrupts use becomes an enemy.

Addiction is a very isolating disease. It will distance us from the very people who could help us the most. And no matter how many “using buddies” the  person has, they will inevitably end up alone. So, there is a great deal of isolation and loneliness.

Another aspect of the way in which addiction distorts the person’s relationships is that addiction is a guilt and shame “generator.” Guilt is a feeling of remorse when we have done something wrong or failed to do something we should have. Shame is a feeling that we simply are “wrong,” or defective. The addict/alcoholic will behave in ways that they feel ashamed of and/or guilty about. The problem is that this causes emotional discomfort and that will be a prompt to use again, thus intensifying the process, leading to increased guilt and shame. So, the isolation from others can be a way in which they try to protect themselves from exposure of their shame.

Addicts may hold onto an illusion of being in control regardless of how out of control they really are. They may exclaim that they can quit any time they choose or that it is not affecting their relationships, work, etc. However, as is readily apparent to everyone else, they are rapidly losing more and more control. Often, addiction will give a person a feeling of being better than others, or of being able to do more than anyone else.

In an effort to control feelings, the person may use drugs as a “substitute” for feelings. The drug has predictable results. So, say, at a gathering if the person is feeling fearful of how others will “make” them feel, they may use in order to control their feeling states.

Very often, the addicted person will feel as if they have been, or are being, victimized. This can be real or imagined by the way, and it may or may not have a basis in reality. Most often, it is the person creating situations in which other people will react in such a manner that the addict feels “victimized.” While there are, of course, cases in which the person has truly been, or is truly being victimized, that is not the real issue. In order for the person to get into recovery, they will have to move beyond the victim stance that keeps them thinking:

As we have seen, addiction is a deeply spiritual disease. The problem is that it is a distortion of healthy spirituality. Meaning and connection are stripped down to one single thing: the object or the addictive process. When a person is in their addiction they will settle for something less than what is truly available: