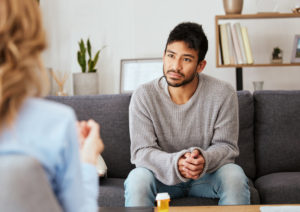 Men’s health month is said to be both June and November. While there is no consensus on the dominant month, I’ve decided to go with November out of its sheer popularity. I originally heard of it being called “No Shave November.” Using facial hair to initiate conversation around men’s health issues in Australia, men spread the conversation about men’s health.

Here in America, men’s health conditions span the board affecting men’s health. In the top ten, you will commonly find:

Anyone of these issues can be written on for days, but as a suicide preventionist, I have a particular leaning toward discussing depression and suicide among us men. 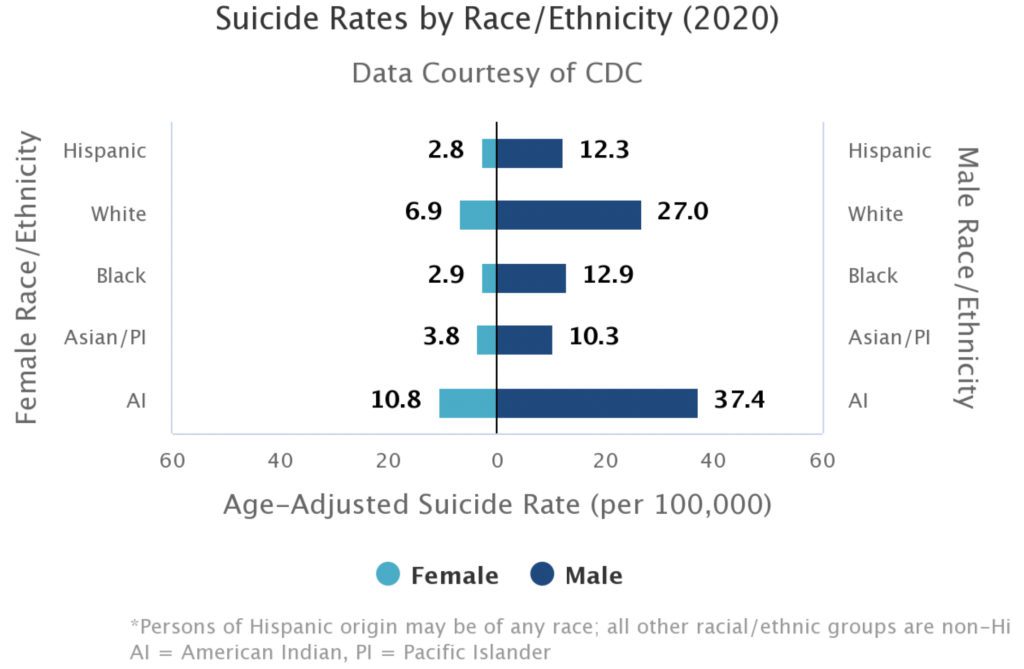 This graph shows The rates of suicide were highest for American Indian, Non-Hispanic males (37.4 per 100,000), followed by White, Non-Hispanic males (27.0 per 100,000). Among females, the, rates of suicide were highest for American Indian, Non-Hispanic females (10.8 per 100,000) and White, Non-Hispanic females (6.9 per 100,000). And while suicide seems to be killing men at alarming rates, there is little in our popular public discourse around this topic. What is stopping men from having these conversations with others and each other? I commonly see dialogue around money, cars, sexual preferences, fitness, and even faith traditions, but discussing mental health and suicide among men is almost absent. Don’t get me wrong; I hear public mental health dialogue. The overall culture around mental health dialogue is starting to sway. I see it more in popular discourse.

The issue is that one of the most prominent groups affected in the mental health discussion does not seem to be proactively present. Men are underrepresented as therapists, as some estimates say women make up 70% of therapists and 58% of psychologists. The numbers again range, but estimates say around 25% of therapists are male. Almost 80% of 100% of those therapists are White, 10% Asian, LatinX 6%, African American 4%, American Indian and Alaskan Native are less than 1%. A smaller fraction than 1% makes up male therapists of color.

The reason for this is variable, depending on whom you ask. But it’s reflected in our culture at large that men are not present in the dialogue or in the profession of mental health workers. So how can we inspire both a culture of safety and professional accession of men in mental health? Here are a few suggestions I have.

We need to keep promoting discussions surrounding mental in popular dialogue. The normalization of this discussion creates a sense of safety and connection for those who realize it is more common than not to have a mental illness or issue.

Men have to become more emotionally competent; when some hear this, it’s been interpreted as becoming more feminine. This is not what I mean. It’s problematic that we’ve gendered emotions that all humans can experience. I mean that men have to grow their ability to understand, interpret, label, and develop an emotional range that allows them to put that emotion into play for their benefit and the benefit of those who love them.

We, as men, have to see life more relationally and less as a status contest. As a man, I regularly perceive status-making and the hierarchical nature of male relationships. Because the idea of being emotionally sensitive is seen as weak, that man seems to be at the bottom of the hierarchy and less appreciated for his emotional contribution. This isn’t exclusive to men, as women can also participate in this behavior to uphold this norm.

Go to therapy. Men are exponentially higher in rates of completing suicide but less likely than others to go to treatment. There is still a perception that therapy makes you weak, shows a lack of willpower, or demonstrates a lack of faith. In actuality, attending therapy reflects a level of emotional awareness that suggests the strength to confront and handle one’s mental world safely.

These are just a few suggestions on how we can begin to keep and perpetuate the conversation of mental health growing among men and popular discussion. As men, we have to try something different. Now more than ever, we can spread awareness and gain access to mental health help. We should take advantage of it.

Be proactive, be intentional, go to therapy. Be Well. Happy Movember.