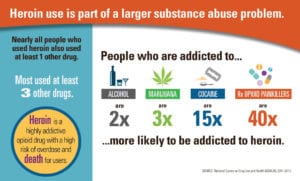 Use, overdoses of drug rise rapidly

NORTH FULTON, Ga. — President Barack Obama announced Feb. 2 that he would ask Congress for $1.1 billion over the next two years to fight what he called a growing heroin problem. According to a new report from the Fulton County District Attorney’s Office, the problem isn’t just growing nationwide, it’s growing in North Fulton.

In a report released Jan. 15 titled, “A Window of Opportunity: Heroin in North Fulton County,” local community activists, police, attorneys and doctors detail a sharp rise in the use and abuse of heroin in the Atlanta metro area, specifically North Fulton.

Numbers from the Centers for Disease Control and Prevention paint a stark picture. Since 2001, there has been a six-fold increase in the total number of deaths nationwide from heroin, primarily in men, from less than 2,000 nationwide to more than 10,000 in 2014.

Heroin-related deaths have quadrupled since 2000, and overdoses from all drugs now take more lives each year than car crashes. Heroin and opioid drugs are now responsible for 44 deaths per day nationwide.

The epidemic is particularly profound in the Midwest and New England, especially Vermont. In January 2014, the Vermont governor spent the entirety of his State of the State address describing the heroin crisis in his state. Heroin deaths in that state doubled from 2012 to 2013.

Closer to home, the Fulton County Medical Examiner’s Office recorded a total of four heroin deaths in 2010, as compared to 31 in 2013 and 77 in 2014. Trends suggest that heroin overdose cases recorded in the Grady Hospital Emergency Department in 2015 will almost double 2013 overdose rates.

According to numbers listed in the Fulton report, the majority of these deaths were from North Fulton and Atlanta. South Fulton had only one death. The vast majority of those who died were white.

How does this happen?

As stated in the report, the primary causes of heroin abuse are the use of other drugs, especially marijuana, but also a prior use of opiate painkillers.

The report’s authors note it is the abuse of painkillers in the northern suburbs that has helped cause the current epidemic. While political and public safety efforts in recent years have targeted an abuse of prescription painkillers, such as by closing “pill mills,” those drugs became harder to obtain and their cost has gone up. Into this gap in the market came heroin, a cheaper substitute.

Heroin is an extremely dangerous drug in that it is highly addictive, it provides a profound sense of euphoria and peacefulness, and is of increased purity and often cut with dangerous substances such as fentanyl, an addictive additive that can be as much as 100 times more effective than morphine.

Alpharetta resident Kate Boccia said her son, Daniel, became addicted to painkillers in high school after having his wisdom teeth removed. She said he told her he took an entire bottle of Percocet pills in three days. He transitioned to heroin and was eventually arrested in 2012 and received a 15-year sentence.

Boccia has been an advocate of stronger support programs in Fulton County to address addiction, saying treating addicts is better than trials and prison.

“If [addicts] don’t die, they will end up in a courtroom,” Boccia said. “They can’t get healthy without proper treatment, which does not exist.”

The idea, she said, is to divert addicts to community-based treatment programs to help them kick the habit before they die or end up in jail, like Daniel.

Boccia said teens and young adults in North Fulton are more likely to become addicted to heroin than in the south of the county thanks to the relative wealth in the northern suburbs.

“[South Fulton residents] may not have enough access to medicine cabinets like up here,” she said. “And if they can’t find drugs in their parents’ medicine cabinet, they can afford to buy them.”

Dealing with the issue is complicated. Admitting there is a problem is the first step, and the Fulton County report is that step, Boccia said. With hard data, governments can use this to allocate funding and resources to local help. One such place is the Hub Community Resource Center, located in Johns Creek, which acts as a waypoint for those seeking resources for drug abuse and mental illness. She said the report, with support of the Fulton County District Attorney, local police and community leaders, can lead to heading off the problem before it becomes larger.

“Communities need to take ownership and say this is a problem. This is an uncomfortable truth about the community,” Boccia said. “Our perfect world may not be so perfect.”