The Act of Bearing Witness 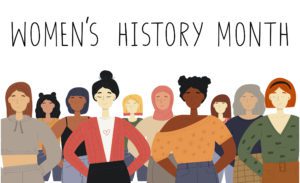 Welcome to Women’s History Month. For most of American history, you can find extravagant periods in which the voice of Women is almost absent. You will find historical apologists of this phenomenon willing to present to you a greatest hits album of Women too notable to dismiss such as Susan B. Anthony, Ida B. Wells, and Sojourner Truth. Contemporarily we are still learning the names of those who walk down the paths that have been created by their socioeconomic and theological ancestors.

Names such as Dr. Renita Weems, Dr. Anneliese A. Singh, Dr. Angela Davis, Dr. Brené Brown, Dr. Patricia Hill Collins, Nadia Bolz-Weber, and Kimberlé Crenshaw. These women are only the tip of the iceberg. My status as an African American, cis-gendered/heterosexual, male doesn’t require that I introduce you to name’s such as Dr. Chanequa Walker-Barnes, Dr. Pamela Durso, Dr. Merhrsa Baradaran, Dr. Darlene Clark Hine, or Dr. Nancy deClaissé – Walford. That does not stop the factors that the previously mentioned women have studied from the impact on the mental health of women past, present, and future.

One in eight women experiences depression, which is twice the rate of men.1 One in five women has a mental illness such as depression, PTSD, or an eating disorder.2 Women are also four times more likely to have an uncompleted suicide attempt than men.3 Women who are full-time workers still earn about one-fourth less than their male counterparts in a given year. Economic struggles present themselves in terms of lack of access to higher quality (and by often more expensive) healthcare.4 Perhaps one of the devastating statistics is the fact that one in three women suffered sexual or physical violence, and/stalking by an intimate partner in their lifetime.5 It has been stated in interviews of doctors studying the population of immigrant women in the US that migrant women demonstrated a declining mental health status that did not exist before their arrival.

There is always hope in action, however. While women and nonbinary peoples may already participate in this effort more men have the knowledge nor more than ever to participate in a future that is healthier in terms of equity and equality. Accepting the eyewitness accounts of women’s treatment allows us the power of their perspective to understand their lens of how women see the world. Allies of Women then have the power to bear witness. Just as a witness is called in court to increase the credibility of the case, we can bear witness to the testimonies of countless Women living and stating their truths.

As a witness, we can become allies and propagators of their story, their truth, and their empowerment. The witness speaks intentionally to use their power of personhood to carefully cosign the truths present in the statements of women. When we begin to become personally invested and bear a margin of risk with them, we can become coconspirators intentionally leveraging whatever privilege (large or little) for the good of their fight for equality, equity, and justice. Bearing witness then is not just a statement, nor an act of passively watching. Bearing witness is an action that precipitates becoming an active participant in creating a better world for women. A world in which women’s mental health is taken seriously and not just a woman being emotional. A world in which a woman’s strength is not a cage to levied upon our needs and wants to be thrust upon her. A world in which access to health care is not denied to her because of her economic standing; or her willingness to bear a child without pay. The Act of bearing witness is not just viewing passively, it is an action of intentionality.

Join us as we intentionally seek to bear witness at the North Fulton Mental Health Collaborative, March 31, 2022, at 10 am. We will have a panel of women who are professionals across the field of mental health to discuss topics and issues that affect them. Please join us and bear witness.