Anatomy of an Epidemic: Magic Bullets, Psychiatric Drugs, and the Astonishing Rise of Mental Illness in America 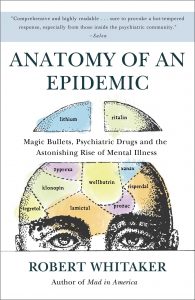 Anatomy of an Epidemic: Magic Bullets, Psychiatric Drugs, and the Astonishing Rise of Mental Illness in America

Robert Whitaker in his book Anatomy of an Epidemic investigates the research on the long-term effectiveness of psychiatric drug use. He questions why the number of people in the United States receiving government disability for mental illness has skyrocketed over the past two decades since the discovery of antipsychotics, benzodiazepines and antidepressants. Wouldn’t we expect those numbers to decrease if we truly had found the “magic bullets” that would correct brain chemistry? He then turns his attention to the use of Attention Deficit Disorder (ADD) and Attention Deficit and Hyperactivity Disorder (ADHD) medications and their connection to manic episodes in 10-25% of kids prescribed these drugs. Although Whitaker makes it clear that he favors psychiatric medications he believes they should be used in a cautious and selective manner. His concern is about the over prescribing and the misuse of these power drugs and their effects on our nation, particularly our younger generations.

This book is well researched and easy to follow. Whitaker gives a concise history of the development of psychiatric drugs and a good explanation of the theory behind their use. In 2011 he won the award for the best investigative journalism book of 2010 from Investigative Reporters and Editors. They were quoted saying, “this book provides an in-depth exploration of medical studies and science and intersperses compelling anecdotal examples.” This book is an important read for anyone taking psychiatric medications or those considering beginning medication. It is an important way to stay informed and to become your own best health advocate.

The purchase of this recommended book using the link above will contribute to the funding of The Summit Society and benefits our ministry of care for those in need.