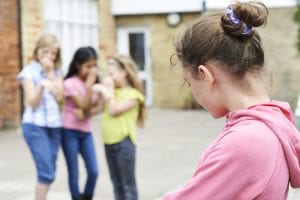 We often hear this word being thrown around but what is bullying really? Stopbullying.gov defines bullying as unwanted, aggressive behavior among school aged children that involves a real or perceived power imbalance. The behavior is repeated, or has the potential to be repeated, over time. Both kids who are bullied and who bully others may have serious, lasting problems.

In order to be considered bullying, the behavior must be aggressive and include:

Bullying includes actions such as making threats, spreading rumors, attacking someone physically or verbally, and excluding someone from a group on purpose.

There are three types of bullying:

The most important thing we can teach our children is how to be an upstander instead of a bystander. We can do this by teaching empathy and perspective taking in daily situations. Help your child practice seeing all sides of a situation or disagreement by making talking out other perspectives, views, and opinions; even if they do not align with your own. If your child is being bullied it is important to help give the child choose to problem, solve conflict instead of immediately going and fighting the battle for them. In the long run giving our kids the tools to be assertive and confront hard situations will lead to empowerment. However, if the situation is severe, harmful, or life threatening it is always important that an adult step in and take immediate action.