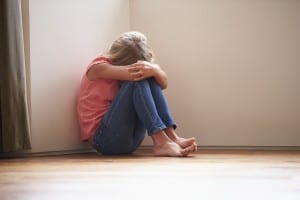 How common is childhood abuse or neglect?

By conservative estimates, about 40 percent of American children will have at least one potentially traumatizing experience by the age of 18. This traumatic experience may include the death of a parent or sibling, ongoing physical abuse and/or neglect, sexual abuse, or the experience of a serious accident, natural disaster or domestic violence or other violent crime. Furthermore, in 2011 alone an estimated 3,000,000 official reports of child abuse or neglect were made to government child protection agencies; around 675,000 of these cases were confirmed or substantiated. Of course, the true number of abused and neglected children is most likely higher, because most cases are never reported and some genuine cases cannot be sufficiently corroborated for official action to be taken. Some experts assert that the most moderate estimates suggest that at any given time, more than 8,000,000 American children suffer from serious, diagnosable, trauma-related psychiatric problems while roughly one third of children who are abused will have some clear psychological problems as a result. This exposure to trauma can also lead to a significantly increased risk of medical or “physical” problems including heart disease, obesity, and cancer among adult survivors.

This deep and ongoing impact of early trauma is often described as complex trauma. Some trauma experts define complex trauma exposure as the sequential or simultaneous incidents of child maltreatment that include emotional abuse and neglect, physical and/or sexual abuse, and witnessing domestic violence. These occurrences usually begin in early childhood and are chronic in nature with long-ranging effects into adulthood. Additionally, the effects of complex trauma result in emotional dysregulation, loss of a safe attachment base, inability to detect or respond to danger cues, loss of direction, and often lead to subsequent traumatic experiences. Given this epidemic of abuse among American children, mental health professionals need to possess a certain competency level of knowledge and skills in order to help adult clients who have survived complex trauma from childhood.

Because this type of chronic trauma occurs during the most vulnerable period of one’s life (childhood) while the brain is developing, helpful complex trauma treatment can require a considerably longer amount of time than someone who has traditional Posttraumatic Stress Disorder (PTSD). Effective treatment often means a substantial commitment of several months to even years for some people.

Where to Get Help

I possess in-depth trauma training and conduct therapy utilizing a variety of evidence-based practices. I have also completed advanced training in complex trauma treatment from multiple universities and trauma training programs. If you are an adult who has experienced significant trauma or neglect from childhood, then I would be happy to help you. Please call the Summit Counseling Center at (678) 893-5300 to set up our first session.