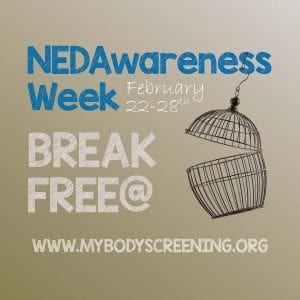 By the time she had entered high school, Elizabeth had already been diagnosed with anorexia nervosa. By her sophomore year she had been hospitalized, completed a treatment program and was seeing a therapist and taking medication. “Though the transition was difficult at best, high school was a really wonderful experience for me, something I attribute largely to the fact that I had an incredible support system,” Elizabeth recollects. “My parents were amazing – they embraced family therapy, helped foster my coping skills, and disassociated my worth from my appearance. I also saw a therapist, psychiatrist, and nutritionist regularly.”
Everyone–including Elizabeth–felt she was doing remarkably well.The transition to college however, unearthed a number of new challenges for her. “In high school, figuring out food and managing body image and eating disorder-related emotions had been far less complicated – there was time built into each day for meals, many of which were prepared by and consumed with my parents–I had a built-in support system.” At college, Elizabeth found that this structure she relied on had disappeared and was replaced with anxiety and confusion. Elizabeth found herself thinking, “What do I want to eat? Am I full? How can I manage my dining hall anxiety?” While Elizabeth’s family had provided a very supportive environment when she was living at home, she found living among 18-year-olds to be unexpectedly triggering for her. “It was very easy to get caught up in the body-shaming, diet-dominated rhetoric of my peers, and to engage in harmful comparisons. Combined with the “normal” anxiety of freshman year, these things quickly overwhelmed me.”

Elizabeth was already battling insurmountable anxiety and confusion when the unthinkable happened. She was raped. “Everything I had felt prior to the assault multiplied in intensity. As the negative emotions built within me, I became increasingly isolated, oscillating between depression and anxiety in my own shameful world. My eating habits became erratic, cycling between binge-eating and restricting with what felt like absolutely no control.” Elizabeth felt silenced by the stigma so commonly attached to eating disorders and was disheartened by a lack of resources her campus offered–“I decided the best course of action was to suffer in silence.”

Elizabeth continued to suffer alone until she returned home for the summer following her Freshman year, when she disclosed her eating struggle to her parents. Her parents encouraged her to see a nutritionist who helped her to develop a positive relationship with food and her body. Her parents listened to her and continued to stand by her, encouraging her to seek out a counselor at school when she returned the following semester.

In the fall, Elizabeth connected with a trauma counselor at her school. She was patient, empathetic, and constructive, validating her feelings, challenging her negative self-talk, and reminding her to breathe. Most importantly, she listened to her and supported her when she decided that staying on campus was not conducive to her recovery.

Elizabeth began the second semester of her sophomore year as a transfer student at a women’s college. “It took some time, but I began to trust that I was capable of making the best decision for myself and for my recovery,” said Elizabeth. “I began to accept self-care not as selfish or indulgent, but as necessary for healing.”