How are Food and Emotions Connected? 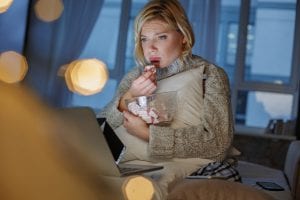 Our culture now has a term for anger associated with hunger. Irritable, hungry people are often called “hangry”, a condition solved quickly by eating. While being “hangry” is not usually a serious problem, you may have wondered what kind of diet has been shown to be the best for brain and emotional health. Lean protein, leafy greens, and fruit appear to be optimal foods for both physical and mental health. The link between physical and emotional health appears to be mediated, at least in part, by the inflammation response of our bodies. Diets that include fish, eggs, and chicken, along with leafy green vegetables and fruit, are associated with decreased inflammation.

What is inflammation? It is a process by which the body’s white blood cells release chemicals to protect us. When people eat unhealthy foods, white blood cells release chemicals that attack toxins, either directly or by pushing them out of our organs. An inflammation response is helpful for removing damaging substances from our cells, but if unhealthy food is eaten regularly, over long periods of time, then chronic inflammation may result.

Swelling, joint pain, and fatigue are each associated with inflammation, as is depression. Recurrent or highly acute stress can lead to an over-active inflammatory response, which is a risk factor for depression. In a review of over 20 studies on the effects of healthy diets, researchers found that diets that include a lot of fruits and vegetables make adults much less prone toward depression.1 Another study examined the diets of over 3000 Australian children. Those with healthier diets were in better physical health, and those eating a higher number of fruits per day demonstrated better control over their emotions and their behavior.2 Fruits rich in antioxidants, such as berries, are thought to be neuro-protective, in that they may reduce the risk of damage to brain cells.

Exercise and healthy body weights are also linked to better emotional health.3,5,6 Children who are physically active 3 hours per day are much more likely to feel positive and upbeat about life than those who are active less than one hour per day. Active children also tend to perform better academically than those who are more sedentary.4 One study revealed a significant positive association between physical activity and white matter in the brain, an association that has been linked to better performance in school.4 Students should make sure they make time to exercise and eat healthy foods.

When there are problems with behavior and performance in school, a psycho-educational assessment can be helpful for identifying the source of the difficulties. At The Summit Counseling Center, we provide diagnostic assessments for learning and mental health problems in children, adolescents, and adults. Please contact psychologist Rebecca L. Marshall, Ph.D., for more information at 678-893-5300.