It’s not just drug users who are scared to call but also family members who fear their brother, sister, son, or daughter could get arrested. It’s that hesitation that could cost the user his or her life.

The law protects the person overdosing as well as the witness from being charged or arrested for being under the influence of drugs, possession, and paraphernalia.
If you were spending time with a friend and they clutched their left arm and collapsed to the floor, you would likely call 911 without a second thought. Chances of surviving a heart attack, much like chances of surviving a drug overdose, rely heavily on the immediacy of medical attention. There’s one glaring difference though—when faced with a drug overdose, people tend to freeze. There is a multitude of reasons why this happens but most of them revolve around fear: fear of being arrested and charged with a crime, fear of suffering the torment of withdrawal in jail, fear of friends, family, and employers finding out. People in these circumstances find themselves weighing the potential of ruining their life with convictions and being shunned by society to the possibility of death, which may seem like the less likely outcome. Sadly, the reality is that death is far too often the outcome of an overdose that goes unreported. Drug overdoses are now the leading cause of death for adults under 50.

The 911 Good Samaritan Law is designed to encourage people to call and seek medical attention when experiencing or witnessing an overdose. The law protects the person overdosing as well as the witness from being charged or arrested for being under the influence of drugs, possession, and paraphernalia. Its implementation is a valiant attempt to remove any apprehension that people may experience when faced with the decision to call or not to call. However, it is only effective in doing so if people are aware of its existence. If a person is unaware they will receive immunity, their fear of consequences will still be present. Fear causes hesitation and in many cases leads to the decision not to act at all. This is a vast issue with grave consequences.

We are in the midst of a drug epidemic that is destroying American families all over the nation. With something as prominent and affecting as this, it would seem surprising that the media coverage and level of conversation aren’t fitting for the level of crisis that’s occurring. With headlines revolving around Trump, #MeToo, and mass shootings, where does the opioid epidemic fit in and why don’t people seem to care at the same level? It devastates a community when a high school athlete dies in an auto accident or a young mother loses her battle with breast cancer, but when a person succumbs to a drug overdose, aside from immediate family, society is aloof and often dismissive. Overdose fatalities do not garner the same response as deaths caused by other diseases or accidents because of the stigma of addiction, which is perpetuated by an uninformed society that desperately needs to be educated. Spreading awareness and educating the public would change this culture and ultimately save lives that would otherwise have been tragically lost. 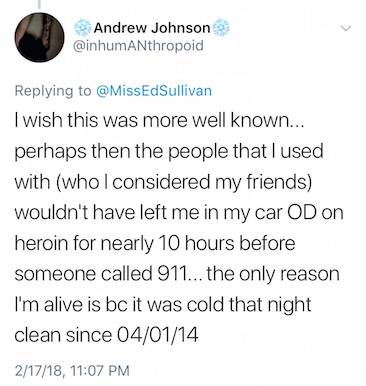 As of July 2017, 40 US States and the District of Columbia have passed Good Samaritan laws, however, the immunity provided varies state to state. For example in California, the law covers possession, paraphernalia, and being under the influence but does not protect against parole and probation violations. While California does not offer that exemption, 18 other states do. As progressive as California is, the Good Samaritan protections and extent to which the state aims to educate and inform regarding these laws are lacking in comparison to many other states. New York Police Department ran public service announcements in the 30 precincts where drug overdose fatality rates were highest, they also advertised on social media and public transit vehicles. Manatee County in Central Florida ran public service announcements on television and in movie theaters, advertised on social media and provided information cards to students at local colleges. North Carolina and Washington are both very active in spreading awareness of their state’s drug immunity laws as well.

In California, the most blatant attempt to inform and spread awareness can be attributed to a grieving mother, Denise Cullen, who lost her son Jeff in 2008 to a drug overdose. She transformed her grief into action and launched Broken No More, a nonprofit organization committed to spreading awareness of Good Samaritan Laws. Denise can be thanked for raising over $10,000 to go toward a Naloxone shortage in 2012 and a billboard in Los Angeles outside of Cedar Sinai Medical Center that was displayed from April through May in 2015.

California law enforcement’s role in spreading awareness is weak, their participation lacking. In the Rancho Cucamonga Police Station lobby is not one poster, pamphlet, or sign giving any information on the laws. When asked if Upland’s Police Department is currently training or encouraging officers to spread awareness Sergeant Rob Steenerson of Upland Police Department stated, “the laws are probably more well known in drug circles but it’s not something we go out and advertise. We would rather not have these people using drugs and I don’t know if there is some sort of place they would get that information in pamphlets or something but we don’t have any flyers or community outreach, I’m not aware of anything we actually do.”

I conducted a recent Twitter poll which concluded that 53% of participants had never heard of Good Samaritan Laws. Admittedly the results were not as staggering as other factors seem to indicate. Although, people participating in Twitter polls are likely more politically and socially informed than people in “drug circles” might be. Not because addicts are uninformed people, but because when in the depths of addiction, people can live in a bubble, cut off from the outside world. To prove this theory, I wandered into a local Narcotics Anonymous meeting and waited for the speaker to finish. When the meeting leader asked, “Are there any NA related announcements?” I jumped up and told everyone about the law and asked to take a poll. This randomly selected Narcotics Anonymous meeting that gathers each Friday at 8 pm in the city of Rancho Cucamonga, had 23 attendees and only one of those attendees raised their hand when asked who was aware of the 911 Good Samaritan drug immunity laws. 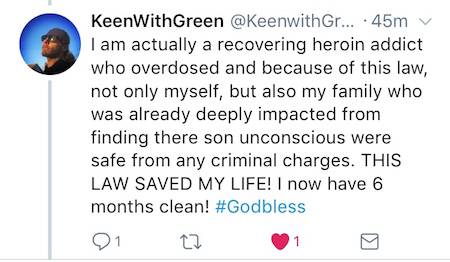 Stephen Lux, who served Montclair Police Department for 29 years, shared his take on the lack of awareness and potential solutions regarding drug immunity laws. Stephen stated, “Law enforcement should change its own philosophy on how we work with the community. We should not only be hunters of criminals, we should first be protectors. Part of that protection is educating the public. We should have a huge role in educating people about drug use and its negative effects, as well as laws that protect people that suffer from addiction and their family members or those who try to help. It’s not just drug users who are scared to call but also family members who fear their brother, sister, son, or daughter could get arrested. It’s that hesitation that could cost the user his or her life. Law Enforcement could start to change their image to one of that we are not here to incarcerate, we are here to help.”

Passing the law is admirable; it is without a doubt, a step in the right direction. However, acknowledging the law is only effective in alleviating fear to involve the police, if people know they are protected, is equally as important and yet ironically ignored. To be frank, the 911 Good Samaritan Laws are completely useless if no one knows about them. There should be a sign in every police department lobby. There should be billboards outside of hospitals in every county. There should be public service announcements, social media advertising, and television news features. There should be community outreach and specific training for law enforcement, who is in constant contact with drug-addicted individuals, to spread awareness and inform. 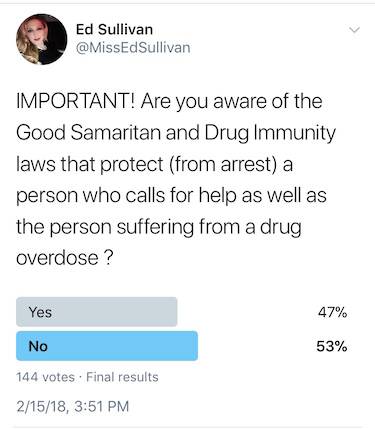 This is no longer a categorized problem, affecting only certain “types” of people or communities. This is a widespread epidemic that is killing our friends, our children, our parents. It’s a problem that belongs to every community and it’s up to the members of each and every community to make a change. Share an article, tell a friend, call your local police department or write a letter to your city council. End the stigma and dehumanization of people who suffer from addiction by staying informed and spreading awareness.

For more information on which states offer which protections, please visit https://www.samhsa.gov/capt/sites/default/files/resources/good-samaritan-law-tool.pdf.

To check out Broken No More, the NonProfit committed to spreading awareness, please visit http://broken-no-more.org/.