Origins: How the Nine Months Before Birth Shape the Rest of Our Lives 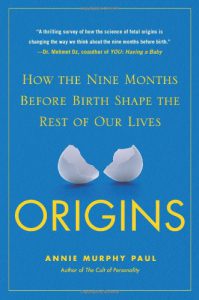 Origins: How the Nine Months Before Birth Shape the Rest of Our Lives

Reviewed by The Summit Staff

Stress during pregnancy is usually discussed in negative terms and fear and anxiety seem to be the rule in explaining its possible consequences.  A recently published study by researcher Janet Di­Pietro suggests that, at least in part, the contrary may be true.  DiPietro, an internationally recognized leader in the field of child development, is credited with having described for the first time the ontogeny of human fetal brain–behavior relations throughout gestation, the associations of maternal and fetal characteristics with the neurobehavioral maturation of the fetus, and the fetal neurobehavioral origins of individual differences in infant physiology and behavior. Her latest study shows that 2-week-old infants of women who experience relatively more stress during pregnancy showed faster neural conduction, “evidence of a more mature brain.”   Thus, maternal stress during pregnancy may actually stimulate the unborn child’s brain development, suggesting that the dreaded nefarious effects of stress on the child may be simply a matter of degree.

In that same vein, Science writer Anne Murphy Paul, author of Origins: How the Nine Months Before Birth Shape the Rest of Our Lives, classifies prenatal stress as belonging to the “profoundly unsatisfying” category of “it depends.” While describing her second pregnancy, Murphy Paul traces the developing literature on fetal origins, which has been called the staging ground for well-being and disease in later life. In her chapter on stress, she cites the existence of 200 industrial chemicals that can be found in babies’ umbilical cords, the link between low birth weight and later cardiovascular disease, and raises the possibility that a dietary supplement might one day protect future children from cancer.

Origins also suggests that a single exposure to an environmental toxin may produce damage that is passed on to multiple generations; that diabetes, heart disease, and mental illness may originate in the womb; why pregnancy health can promote lifelong health in preventing cancer and reducing obesity. The author advocates that the fetus is not an inert creature, but an active and dynamic human being, who responds adaptively to the environment. Thus, the pregnant woman should not be seen solely as a source of potential harm to her baby, but also as a positive influence on her future child that can be powerful and lifelong. Far from a mere nine-month wait, pregnancy is a distinct period in the life of the baby that can prove to be a source of individual strength and wellness.

Murphy Paul’s focus on how expectant mothers can minimize harm to their unborn child during pregnancy makes her book a fascinating read that will help understand and put into perspective the opportunities and dangers of this crucial period in every human being’s life.

The purchase of this recommended book using the link above will contribute to the funding of The Summit Society and benefits our ministry of care for those in need.