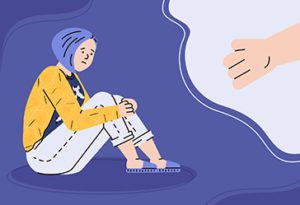 Due to the COVID-19 pandemic, we are collectively experiencing greater trauma, loss and adverse circumstances that have nearly doubled the number of people experiencing depression and suicidal thoughts compared to previous years.

According to CDC reports:

The numbers are even more staggering among teens:

Now, more than ever before, it is important that we learn and understand the key elements of suicide prevention:

Suicide prevention begins with recognizing the warning signs and taking them seriously.

A combination of factors can contribute to the risk of suicide. These risk factors can increase the possibility of suicide but might not be the direct cause.

Just as exercise and a healthy diet can guard against certain health issues, protective factors can help buffer individuals against suicidal thoughts and behaviors

Responding in a Time of Need

If you notice someone is exhibiting any of the warning signs, you can help! Research has found that asking someone whether they’re having suicidal thoughts does not give them suicidal tendencies.  The actual risk is not talking about suicide with someone who may be in crisis.

The Summit is a leading catalyst in normalizing the conversation surrounding mental health and suicide prevention through engaging community leaders and families in an on-going dialogue and facilitating workshops in our schools, churches, businesses, and community at large. Contact Darrick Brown at 678-893-5324 dbrown@summitcounseling.org.

Signs of Suicide: Trusted Adult
This workshop is designed to educate and train adults that interface with middle and high school students.

Soul Shop for Faith Leaders & Soul Shop for Youth Leaders
A faith-based workshop aimed for individuals who work with adults and youth. This will equip leaders to recognize warnings signs of suicide, engaging in life saving conversations and ways to keep suicidal individuals safe. Soul Shop also provides practical ways to integrate the material into lesson plans and activities. Great for youth group leaders, faith-based counselors, or volunteers working in a religious capacity.

Question Persuade Respond (QPR)
Just like CPR, QPR is an emergency response to someone in crisis and can save lives. QPR is the most widely taught Gatekeeper training in the world. The signs of crisis are all around us. We believe that quality education empowers all people, regardless of their background, to make a positive difference in the life of someone they know.

Are you or a loved one struggling with depression, anxiety or suicidal ideation?

If you are having a mental health emergency please contact 911 or proceed to your nearest emergency room for immediate care.