‘Some of the Greatest Causes of Misery’: U.N. Warns Of Pandemic’s Mental Health Costs 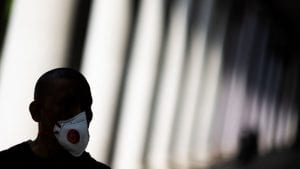 The dire consequences of the global pandemic have been difficult to escape, let alone ignore. The devastating effects of the coronavirus — from physical symptoms to economic complications — have made themselves apparent in headline after headline, week after week, for months that have felt like decades.

Yet beneath the klaxon clang of grim news, the United Nations is warning that the coronavirus presents still another menace that health officials must not overlook.

“The COVID-19 virus is not only attacking our physical health; it is also increasing psychological suffering: grief at the loss of loved ones, shock at the loss of jobs, isolation and restrictions on movement, difficult family dynamics, uncertainty and fear for the future,” U.N. Secretary-General António Guterres said in a video message launching a mental health policy brief this week.

He added: “Mental health problems, including depression and anxiety, are some of the greatest causes of misery in our world.”

The U.N. found that even before the emergence of the virus, depression affected some 264 million people worldwide, and suicide was the second leading cause of death in people aged 15-29. The numbers were especially stark in regions beset by violence, poverty and other conditions akin to — and likely exacerbated by — those created by the coronavirus.

“Not surprisingly, higher-than-usual levels of symptoms of depression and anxiety have been recorded in various countries,” the brief explained, pointing to one recent study that revealed an estimated threefold increase in symptoms consistent with depression in Ethiopia since the start of the pandemic.

The stress of the present moment may also lead greater numbers of people to a greater reliance on addictive substances such as drinking and drugs. Canada’s national statistical agency, in a release last month, noted that a fifth of Canadians aged 15-49 had increased their drinking consumption since the start of the crisis.

Addictive behaviors may lead to a rise in what mental health specialists often call “deaths of despair,” or deaths traced to suicide and the misuse of drinking and drugs. One report (released last week jointly by the Well Being Trust and the Robert Graham Center) found that in the U.S. alone, the effects of the virus likely mean that as many as 75,000 more people will die from drug or drinking misuse and suicide. It’s a huge leap over the roughly 181,000 deaths of despair recorded nationwide in 2018, according to the report.

Alarming projections such as these have helped mobilize mental health specialists to embark on a campaign to formulate and foreground mental health resources in the U.S. And the U.N. is urging officials to implement support systems for particularly vulnerable populations, such as the first responders and health care workers who are confronted daily with risks of infection and potentially devastating decisions.

“People need to remember that this is a marathon, not a sprint — to have rest, to share their emotions and words, and to not stigmatize others when they are either affected by it directly or indirectly,” said Fahmy Hanna of the World Health Organization’s Department of Mental Health and Substance Abuse. “And also know that it’s not stigmatizing to seek help for your own mental health and psychosocial needs.”