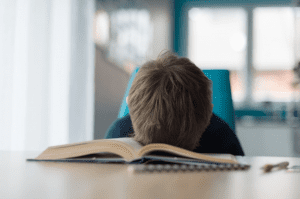 A consensus study report on advancing health equity among American children published this summer by the National Academies of Sciences, Engineering and Medicine added youths in “high achieving schools” to their list of “at-risk” groups, along with kids living in poverty and foster care, recent immigrants and those with incarcerated parents.

Even if you could give your kids everything, should you?

Last year, a report by the Robert Wood Johnson Foundation came to a similar conclusion when it named the top environmental conditions harming adolescent wellness — among them were poverty, trauma, discrimination and “excessive pressure to excel,” often, but not exclusively, occurring in affluent communities. It may sound counterintuitive, even perverse, to put relatively affluent kids in the same category as our country’s most vulnerable youths. While the stressors are markedly different, researchers are finding that both are “at risk” for elevated levels of chronic stress that can affect health and well-being.

“When parents ask me where all of this pressure is coming from, I ask them: Where is it not?” says Suniya Luthar, a professor of psychology at Arizona State University, whose research in the 1990s first uncovered the unique vulnerabilities of privileged but pressured youths. The unrelenting pressure on students in high-achieving schools comes from every direction, from overly invested parents who want A’s, coaches who want wins for their own personal reputations and school administrators who feel pressured to get high standardized scores in their school, which then prop up real estate values in the area.

Facing record-low acceptance rates at top colleges, many students feel tremendous pressure to achieve and résumé-build in all aspects of their young lives. In the pressurized ecosystem of high-achieving schools, driven students must out-compete each other for few coveted spots, whether it’s a seat in AP calculus or a spot on the debate team. Even activities that once were stress-reducers, like playing a musical instrument or a sport, have become a means to an end, that end being a spot at one of the country’s most competitive colleges and then on to a prestigious, high-paying career.

Luthar’s studies have found that adolescents in high-achieving schools can suffer significantly higher rates of anxiety, depression, substance abuse and delinquent behaviors, at least two to three times the national average. Some warning signs, like excessive peer envy and cheating, tend to emerge in middle school, but other symptoms of stress are being seen as early as elementary school. When a child’s sense of self-worth is dependent on what they achieve, it can lead to anxiety and depression. Anxiety can come from worrying about keeping up with or outshining peers, while depression can be caused by a failure to achieve.

“Of course, not every student in these communities is affected and not every school exhibits the same symptoms, but as a group, high-achieving students appear to be at a much greater risk,” she says.

In a recent national survey of 43,000 students from high-performing schools by Challenge Success, a research-based organization affiliated with Stanford University, three-quarters of high school students and half of middle school students reported “often or always feeling stressed” by their schoolwork. More than two-thirds of high-schoolers reported being “often or always worried” about getting into the college of their choice. Many students have been fed the myth that there is only one, narrow path to success — acceptance to a prestigious college — and they have internalized that message, says researcher Denise Pope, co-founder of Challenge Success.

So what enables some students to avoid the negative effects of such high-stakes pressure? A 2017 study published in the Journal of Youth and Adolescence offers some insight. Researchers surveyed more than 500 middle school students from a high-achieving school and asked them to rank values their parents prioritized. Three values focused on achievement (to attend a good college, excel academically, have a successful career) and three on character traits (to be respectful, helpful and kind to others). Researchers also collected data on perceived parental criticism, mental health symptoms, rule-breaking behaviors and grade-point average. Adolescents who believed that both of their parents valued character traits as much as or more than achievement exhibited better outcomes at school, greater mental health and less rule-breaking behavior than peers who believed their parents were primarily achievement-minded, the researchers found. Those who fared the worst reported their mothers placed a higher value on achievement than character, and were also critical.

“Children are so saturated with messages about achievement in many schools and communities that parents need to be really conscious about fighting against those messages at home,” says psychologist Richard Weissbourd, the faculty director of Harvard Graduate School of Education’s Making Caring Common project. Parents can start by having frank conversations about which values are most important to them and asking their child if that’s what is being communicated at home. As parents, we also need to stay vigilant about the hidden messages around achievement that we send our kids every day by what we prioritize, what we admire about others, and what consumes our time and energy, Weissbourd says.

It’s also critical that parents help children maintain a sense of balance in their lives. When Pope’s kids were in middle school, she would create a family contract each year that made clear the values in their household, like mandatory family dinners. Playtime, down time and family time all buffer against stress and pressure, and parents must protect that time, even when it goes against popular norms.

Research has found that in some affluent communities these pressured students to drinking and drugs and suffer from addiction at significantly higher rates than the general population. The best way to protect a child, Luthar says, is to keep the lines of communication open, to set limits and to follow through with them. When parents dismiss risky behaviors as “kids being kids,” it increases the likelihood that a child will abuse substances, which in turn increases their chances of addiction.

“Our job as parents is to help our children feel unconditionally loved so their self-esteem doesn’t rest on the splendor of their accomplishments,” says Luthar.

Jennifer Breheny Wallace is a freelance writer and the mother of three children. You can follow her on Twitter @wallacejennieb.