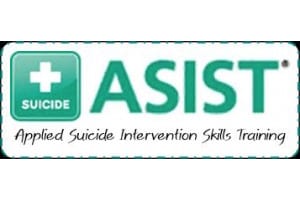 “We are very pleased with the results”, David Smith, Executive Director, said.  “Participants were enthusiastic, worked hard and enjoyed themselves.  If more organizations sponsor this workshop, I have no doubt that many suicidal behaviors can be prevented and many lives saved.”

“The main stumbling block to suicide prevention is the taboo nature of the subject”, Shawn Murphy, Director of Community Outreach, said.  “Only sensational suicides or those involving celebrities are publicized.  Many others are kept quiet to protect family survivors.  This leads the general public to believe that suicide is rare and only effects certain kinds of people.  Nothing could be further from the truth.  Suicidal behaviors, in some form, are likely to affect everyone in a personal way.  They may be suicidal themselves or be close to someone who makes an attempt or completes suicide.  Suicidal behaviors are common to all people – young and old, male and female, rich and poor.”

Glen Bloomstrom, Military Director and trainer at LivingWorks, added that “learning to recognize the possibility of suicide and how to ask directly about the suicide intentions of someone you are worried about are two of the key aspects of emergency first aid suicide prevention.  The major signs of suicide danger”, according to Glen, “are changes in behavior or personality; feelings of desperation, helplessness, hopelessness, aloneness, loss and depression; previous suicide attempt; and, most importantly, suicide statements expressing a desire or intention to die.”

Whenever these signs or other indicators of danger are seen, immediate first aid action is necessary to prevent the risk of suicide.  Locally, information and advice on suicide prevention is available through the Summit Counseling Center at 678-893-5300.  The Summit also encourages persons struggling with thoughts of suicide to contact the Georgia Crisis & Access Line at 1-800-715-4225.