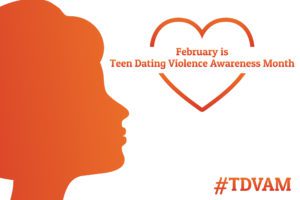 February is Teen Dating Violence Awareness Month. According to the National Institute of Justice, teen dating violence includes physical, psychological or sexual abuse; harassment; or stalking of any person ages 12 to 18 in the context of a past or present romantic or consensual relationship.
The prevalence of teen dating violence is remarkable, with 1 in 3 teens in the United States experiencing physical, sexual, or emotional abuse by someone they are in a relationship with before the age of 18. With 81% of parents believing that teen dating violence is not an issue (or admitting they don’t know if it’s an issue), the need for awareness of this issue is of high importance and is one of the biggest keys of prevention. Two of the Summit’s high school-based therapists, Madeline Chiarella (Johns Creek High School) and Emily Harrison (Milton High School), sat down to answer questions about common signs of abuse, how therapy can help teens during or after an abusive relationship, and how parents can address the topic with their child.

As a therapist working in a high school, you offer a unique, neutral support for teenagers. What are some ways you have seen therapy help students who have been – or currently are – in an abusive relationship?

Madeline: My favorite way to help, and what seems to have the highest success rate, is a strength-based approach. I focus on showing them how to improve their self-worth, so they are better able to identify how they deserve to be treated. We may also identify what makes a healthy relationship as many may not have an example of one.

Emily: During sessions with individuals in abusive relationships, I like to educate about boundaries and how to implement them. Not only do these skills this help protect students, but they also promote self-confidence and self-esteem. Over time, students are able to process out loud the abusive situation and have an “ah-ha!” moment when they realize they set a boundary unintentionally or are able to identify when a boundary needs to be implemented. These little “ah-ha!” moments snowball into an amazing journey of self-discovery, self-respect, and an understanding of the warning signs of abusive relationships.

Since the beginning of the pandemic, we’re online now more than ever – especially in schools. From your perspective, how has going virtual influenced the type or severity of teen dating abuse compared to previous years?

Emily: I believe that going virtual has promoted the already recognized belief/idea that students can say things over technology that could not be said face-to-face. Because teenagers are in an “egocentric” stage of development, they tend to have lower levels of remorse or understanding of the harmful effects of their words, especially virtually. In a virtual setting, the abuser is not provided the opportunity to observe how the abusee is affected, thus removing any sense of detrimental effects that one would otherwise see if it occurred in a face-to-face setting. This has amplified emotional abuse such as gaslighting, emotional manipulation, and disregarding boundaries set by an individual.

Madeline: Professionally, I have not seen a direct link between pandemic starting and increase in teens in abusive relationships. However, I will say that teens are on their phone and social media now more than ever. This can cause them to need more external validation instead of being able to reassure and validate themselves.

In your experience, what has been one of the most common red flags of an abusive relationship involving teens?

Emily: I have noticed that abusive relationships tend to unfold mostly through technology. Some specific red flags are excessive texting without a response from receiver, oversharing deep & personal issues, and being convinced to keep important information secret from adults and requiring a teen to “support” their peer without appropriate medical/health intervention (usually pertaining to suicidal thoughts and/or actions).

Madeline: The biggest red flag is isolation from friends. The abuser can be good at isolating their partner which leaves only the abuser as a source of support. The healthier support they have, the better!

If a parent suspects their teenager is in an abusive relationship, what are some important tips they can use to help them address it with their child?

Madeline: It is important to keep the conversation going. However, be careful not to bombard them with questions as it may cause them to further withdraw. Instead, keep reminding them that you are there for them and can offer a safe place anytime they are ready to talk. I would also say to get them into therapy sooner rather than later.

Emily: It is important to approach the teenager in a way that does not feel threatening. Pushing any beliefs that they need to “break up immediately” may lead the teenager to do exactly the opposite and deepen the abusive relationship. Teach your student relationship “green flags” as well as “red flags”. Be aware of the amount of time your teenager spends talking to the potential abuser and help highlight for your teenager what is healthy and what is not healthy. It is absolutely crucial that you do not place blame on the teenager, as often they can feel embarrassed or ashamed in letting the relationship get to the point of being abusive. Starting conversations that are calm and causal can help your teenager feel comfortable opening up to you and accepting any help you offer. Sometimes teenagers don’t respond well in face-to-face settings, so it may be helpful to suggest a drive to be in a private area that seems less threatening since eye contact is not required in this setting. Address specific behaviors you have noticed in the situation rather than attack their abuser as this could lead to your teenager becoming defensive. Always remember that your teenager is listening to what you have to say, even though it may not feel like it sometimes. Be prepared to be patient and consistent with starting these difficult conversations, and remind your child that you are a safe place for them if/when they decide to make changes.

For more information on Teen Dating Violence Awareness Month, follow us on social media at @summitcounselingatlanta!