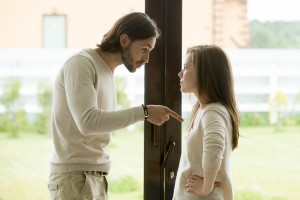 Many times when we get into arguments, one person in the relationship criticizes or is contemptuous, which often leads to the other partner feeling attacked. When someone is feeling attacked they get defensive or shuts down emotionally. Most of the time, Criticism, contentment, and defensiveness are doing a little dance together during an argument. This clearly does not solve the issue at hand but creates more conflict.

Defensiveness gives a message that states the problem is not me, it’s you… There is one form of defensiveness called “innocent victim”, which directs the blame towards the other partner, perpetuating and enhancing the conflict even more. At this stage, neither partner has the emotional capacity to think rationally at this point, and the issues get amplified, rather than resolved.

Defensiveness: “It’s not my fault that we’re going to be late. It’s your fault since you always get dressed at the last second.”

Antidote: “I don’t like being late, but you’re right. We don’t always have to leave so early. I can be a little more flexible.”

Many people have a hard time accepting responsibility, especially after many years of feeling attacked. The key here is to accept one small piece of their statement that you agree with. You might disagree with 98% of what they are saying, but try to find a small bit of truth. You can take responsibility for 2% of the overall statement.

By focusing on what you both agree on, it allows your partner to feel heard, and you two are starting to get on the same page. This makes it much easier to tackle the issue at hand, instead of attacking each other.

Sounds simple, right? Not exactly… The trick is to stay calm, instead of getting defensive or feeling attacked. This requires taking a step back to reflect, “is there any piece of this conversation that I can agree with?” This is responding to your partner, versus reacting. This can be difficult and takes practice. John Gottman himself, admits this can be a struggle from time to time. Stay calm, and take responsibility!

Stay tuned for more relationship advice from The Gottman’s research!