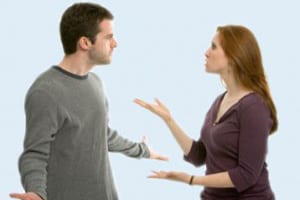 Do the arguments between you and your spouse quickly disintegrate into a heated battle without any chance of reaching a win/win conclusion?  Check to make sure that a harsh start up is not dooming you to failure.

A harsh start up is when you or your spouse begins a discussion with a harsh or critical statement. This statement puts the receiver of the comment on the defensive and sets the course and tone for the rest of the exchange.  Consider the following example.  A newly married couple had a visit from the wife’s mother.  That evening this husband was talking to his mother-in-law.  His wife observed him giving her mother what she interpreted to be hateful look.  The wife stewed about this interaction until the next morning.  At that time her husband was sitting at the dining room table sipping his coffee and reading the newspaper.  According to him, without any warning his wife stormed out of the bedroom into the dining room, sat down across the table from him and with contempt and anger in her voice said, “Why do you hate my mother?”

As you can imagine the husband became hurt and defensive.  The couple never reached an understanding as to what the wife saw and how the husband felt.  In the end the argument became an attack of each others character.  The wife critisized the husband for always walking away and the husband complained that his wife was a controlling nag. The harsh start up took less than a minute but set the course for the rest of the discussion.  Dr. Gottman, a professor of psychology at the Univeristy of Washington at Seattle has spent 30 years researching couples interactions.  He has noticed that 96% of the time a harsh start-up ensures an escalated argument that ends unsuccessfully.

If you want your partner to listen to your concerns, attempt to understand your perspective, and discuss a potential resolution, a harsh start up is a sure fire way to sabatoge yourself.  Changing  the way you start a discussion is a quick and easy way to improve communication between you and your spouse.  This week observe harsh start-ups and creatively rephrase your opening statements.  I assure you, you will be happy with the results!