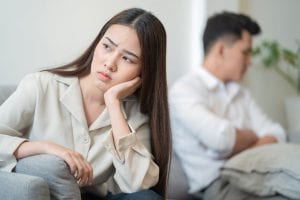 Another act besides criticizing that negatively impacts relationships is contemptment. This behavior is also known as disrespect or coming from a place of superiority. This is the biggest indicator of divorce according to Gottman’s research. Couples who are contemptuous of each other will also have higher health-related issues, such as colds or flues. This behavior impacts people on a cellular level & compromises immunity.

Some examples of contemptment are; name-calling, eye-rolling, mockery, hostile humor, or sarcasm. contemptment never solves the issue at hand, in fact, most of the time, it creates more conflict. contemptment during an argument is fighting the fire, with fire.

For some couples, they have used this form of communication for many years, and they start to lose sight of any positive qualities their partner has. This leads to disgust and a lack of affection & appreciation for your partner. Doesn’t sound very romantic, does it?

Here is an example of how to “fight fair” without using contemptment when discussing an issue.

Contempt: “You forgot to load the clothes in the washer/ dryer again… Geez! Do I have to do everything around here?” (Rolls eyes.)

Antidote: “I understand that you’ve been busy lately, but could you please remember to put the clothes in the washer/ dryer when I work late? I’d appreciate it.”

The antidote to contemptment is building a culture of appreciation. You do not have to write long letters of gratitude, (although you certainly can!), but rather, give thanks for the small things they do and do so often! Show appreciation even for the tasks they typically do, or ones that are going to happen in the future – like bringing the kids to school, mowing the lawn, paying the bills, or taking out the trash. Verbally let them know that you notice the big or small things they do to maintain a life together. Everyone likes to get noticed for their helpful actions!

Another technique is to incorporate respect and positivity into the relationship. When couples practice respect, appreciation, and show positive feelings towards one another, this acts as a buffer to the negative moments. Every relationship will be a mix of positive and negative times, even the “masters”, the term Gottman uses to describe the
successful couples. According to Gottman’s findings, they have discovered the magical 5:1 ratio. This states that for every negative interaction, there should be five positive interactions between couples to keep the relationship “in the green”.

This might sound difficult…. So let’s try to reframe your view of conflict resolution. This does not mean you have to completely agree with everything they say, but it does mean not using contemptment or other harmful actions during the conflict. The positive interaction could be implementing active listening skills, or using appropriate humor to
release tension.

The key points are to always respect your partner. You do not always have to agree with them but keep respect as a solid foundation for the relationship. Sprinkle positivity and appreciation into the everyday moments, small steps over time make a lasting impression. Stay tuned for more of Gottman’s relationship tips and research!