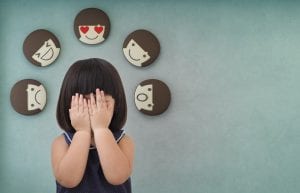 Mastery of the regulation of one’s emotions is a life-long process.  Psychiatrist Erik Erikson (1959) posited that humans must go through eight stages of social-emotional development as they mature into early adulthood and then on to later adulthood.1  Each stage involves a “crisis” of development, which is typically both cognitive and emotional in nature.  For example, during the first two years of life, a young child learns to trust others through attachment to caregivers or to develop a sense of mistrust of others when observing how his or her needs get met.  Emotional satisfaction of feeding and physical touch, in other words, goes hand-in-hand with cognitive awareness of one’s basic needs being met.

Erikson postulated that the successful resolution of crises at each stage of development is critical for healthy social-emotional development.  Conversely, emotional problems may persist and become exacerbated by a lack of resolution or poor resolution of crises in these developmental stages.  From the ages of 3½ to about 6 years, children in Erikson’s stage of “Initiative versus Guilt” learn to become independent in their play and to cooperate with others.  When the critical learning of this stage goes awry, guilt, shame, and fear may predominate a child’s emotional life.

Erikson’s theory is one of many theories of social-emotional development.  His theory is especially helpful when reflecting on the cognitive control associated with healthy emotional and behavioral regulation.   Multiple methods of psychotherapy are based on the close connection observed between thought and emotional life.  One’s beliefs about himself or herself, and one’s belief’s about the perspectives of another, are often critical to the quality of his or her social-emotional interactions.

Most of the cognitive skills associated with the development of emotional regulation are those typically classified under the umbrella term of Executive Function.  These skills include inferential reasoning, sequencing information, perspective-taking, and inhibiting automatic responses (whether cognitive, behavioral, or emotional in nature) and replacing them with more adaptive ones.  Children who have difficulty with executive function skills are more likely than others to have one or more problems with behavioral control, academic achievement, and/or emotional stability.

Emotional health has a significant impact on a child’s academic and daily life.   At the Summit Counseling Center, we provide screening assessments for attention, academic, and emotional problems, as well as comprehensive evaluations for specific learning disabilities.  Through these evaluations, we identify how children may achieve their full potential.  Please contact psychologist Rebecca L. Marshall, Ph.D., at the Summit Counseling Center (678-893-5300) for more information.