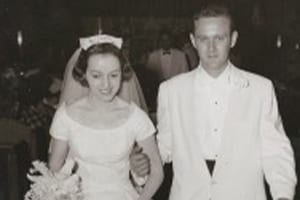 Most recently I have found myself reflecting on the sacredness of marriage. At the center of my home is my parents’ wedding picture.  It is an ever-present reminder to my family of the central value and purpose of marriage. In America where the latest divorce rate is 41% for first marriages, 60% for second marriages, and 73% for third marriages, it appears marriage has lost some of its resilience. In light of the current divorce rate statistics, I have an unusual story. My maternal and paternal grandparents, my parents and their combined eight siblings, and all of their children have remained married. Not one divorce within the last three generations. Although it appears we would be a wonderful case study, no scientific research has been conducted on my family.  I am left with my own personal observations of what held marriages together within our clan.  It does not surprise me that many of these observations are supported by current research on marriage.

3. Regular church attendance. The first major study to compare religion and relationship quality across America’s major racial and ethnic groups found that for all groups, shared religious activity – attending church together and especially praying together – is linked to higher levels of relationship quality.

4. A Servant’s Heart.  Happiness rises from our service to others. In a sacred marriage serving your beloved, bringing them joy, protecting them from harm, and fulfilling their needs and desires brings a level of joy that a giver experiences regularly and that those who focus on self instead of their partner never experience.

These four foundational points appear to be a common thread within my family. The fact that these marriages remained intact despite many difficulties and tragedies brought numerous benefits.

1. Rituals and traditions were preserved. Dr. John Gottman, a renowned expert in the field of martial therapy, recognizes rituals of connection and agreement in life philosophies to be an important area in marital satisfaction.

2. Resilience. Children saw how their parents, grandparents and extended family members handled tough times and disagreements.  They learned the value of working through difficulties and gained valuable experience in how to handle adversity.

4. Financial stability. We know that divorce negatively impacts the finances of all families. Money is divided, two homes are maintained and financial arguments often become a bone of contention between divorced parents. Preserving marriages often puts everyone in a better financial position.

Acknowledging marriage as sacred or sacramental elevates our commitment to marriage and increases our joyful experiences within the covenant. Recognizing the social, educational, spiritual and financial advantages that come from saving a marriage can motivate couples to seek help for their relationship. I am often inspired by the couples I see in marriage counseling primarily because they see their marriage as something worth preserving.  At times marriage counseling is not easy and requires an honest commitment to the process by both partners but the rewards can be reaped for generations!  Take a step to honor your marriage today. If you don’t already have one, I recommend the simple action of framing a wedding photo and displaying it prominently within your home as a testament to the sacredness of your commitment to each other and to the overall health and strength of your entire family including future generations.