The Struggle is Real: Unhealthy Communication 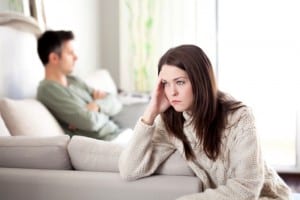 It may surprise you to know that only thirty-one percent of the problems that couples experience are conflicts that can be resolved. The other sixty-nine percent of the problems are irresolvable perpetual issues. Both marriages with high marital satisfaction and those on the verge of divorce experience these same ratios. So what is the difference between these two groups? The research shows happy couples continue to dialogue about the perpetual irresolvable issues because they possess good communication skills. Those on the verge of divorce either experience heightened anger and gridlock or decide to withdraw and disengage from one another. Obviously good communication skills are crucial to a successful partnership.

Arguments happen in all marriages, in fact, they are necessary. Conflicts often arise because of financial stresses, parenting issues and misunderstandings. Couples must face these daily disagreements in order to operate and function effectively. However, there are forms of negativity in arguments that have been found to be more destructive or corrosive to a marriage than others.

Dr. Gottman, a noted researcher on marriage and the author of the Seven Principles for Making Marriage Work, has found that Criticism, Defensiveness, Contempt and Stonewalling are particularly harmful and predictive of divorce. When these four elements become a part of the way couples interact during an argument they tend to escalate the negativity in the marriage.

Criticism is any statement about your partner that implies there is something innately wrong with them. It is any statement that begins with “you always” or “you never” or “the problem with you is”. A complaint is different from a criticism. A complaint says, ” I don’t like the situation” and a criticism says, “I don’t like you”. For example a complaint would be, “I get frustrated when it appears you don’t have enough time to sit down and talk about our son’s behavior.” A criticism is when you say, “You never have time to talk about your son’s behavior. You obviously don’t care about him or me. You are so self-centered and only care about things that affect you.”

Defensiveness is an attempt to protect oneself from a perceived attack. There are many ways someone may behave defensively. They may find a way to blame the other spouse for the mistake they made, they may deflect by changing the center of the discussion from themselves to their spouse, and they may deny by never admitting wrongdoing. Additionally, they may play the victim and try to make their spouse guilty. A defensive response may sound something like this: “Why do you always complain about me. Don’t I do a lot of things right. You never talk about the things I do well.”

Contempt is a statement or nonverbal behavior that puts oneself on a higher plane than one’s partner. Contempt can come in the form of mockery, eye rolls, grunts, haughty laughs or correcting your partner’s grammar when you are angry. A curled lip with an eye roll is the universal body language sign for contempt. In his research Dr. Gottman found a correlation between the number of contemptuous looks a husband gave his wife with the number of infectious illnesses the wife developed over the next four years. Contempt is particularly damaging to relationships and is the single greatest predictor of divorce. The amount of contempt in stable, happy marriages is essentially zero.

Stonewalling occurs when the listener withdraws from the interaction. When we are actively listening to our partner we use facial expressions, nod our head, or make sounds of acknowledgement like “I see” or “uh huh”. A stonewaller makes brief monitoring glances, looks away and down, maintains a stiff neck, tightens their chin and jaw, does not respond and in some cases simply walks away. All these reactions are designed to conceal emotional expression. The listener simply becomes a stone wall.

Criticism, Defensiveness and Stonewalling do occur to some extent even in healthy marriages, however they tend to happen a lot less often. Contempt, on the other hand, does not occur in stable, happy marriages.

Look for signs of criticism, defensiveness, contempt and stonewalling in your communications with your spouse. Improving the way you interact with your partner in arguments can have a lasting positive effect on the health of your marriage.